On Wednesday, October 10, 2018, at 8:39 pm, the Chestertown Volunteer Fire Company was dispatched as automatic aid for the structure fire in the 300 block of Old Bridge Road, Kingstown, Queen Annes County. Chestertown VFC Engine 6 arrived on location with a 3 story single-family dwelling, fire showing externally from the left and rear of the house. Bystanders reported to firefighters someone was possibly still inside the house. A Primary Search and a Secondary Search by multiple crews were negative for any occupants trapped within the structure. A "Primary Search" is a rapid search of the structure completed by the first crew(s) to enter a fire structure. It's intended to find someone who is down inside the structure as quickly as possible and get them out. A "Secondary Search" is completed by crew(s) other then those that performed the Primary Search. It is executed after the fire has been contained and environmental and visibility conditions within the fire structure are substanially improved. It proceeds cautiously and carefully, with every part of the fire structure thoroughly investigated and searched.

During the incident, a victim was found deceased in a shed on the property. The death was deemed not a direct result of the fire. The means and manner of death have not been released and is under investigation by the Maryland State Fire Marshals Office and the Queen Annes County Sheriffs Office. The fire marshal's office is conducting an Origin & Cause Investigation, and have determined the fire was intentionally set on the exterior of the residence. The investigation is still open.

This incident was held to one alarm, with a special call for two addtional engines and one additional ambulance. Media reports of only two firefighter patients, one transported and one refusal at the scene, are in error. Three firefighters sustained minor injuries. One was treated at the scene and was not transported. Two others were transferred by ambulance to University of Maryland Shore Medical Center at Chestertown for evaluation and treatment. They have since been released. Other then the deceased victim, no civilians were injured.

As a result of fire operations, the following roads were closed: Old Bridge Road and River Road. The parking lot of CJ's Automotive was used as a staging area. The fire was declared under control at 10:19 pm. Personnel and equipment remained on the scene for several hours to provide lighting and manpower (as-needed) for the law enforcement investigation. During that same time-frame, mop up operations were completed. 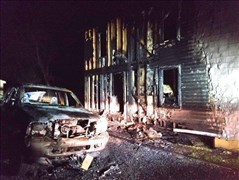 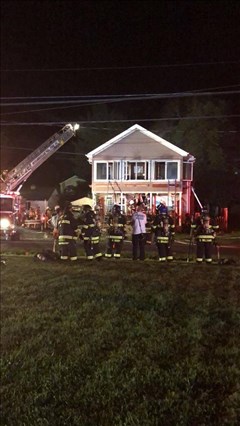 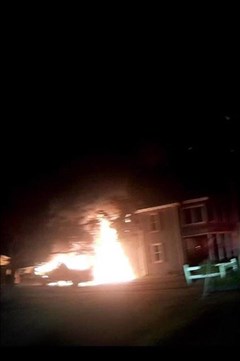