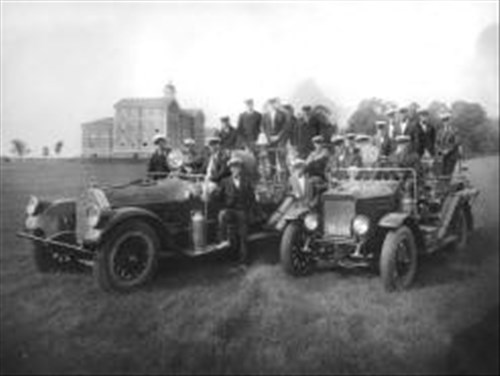 There are no records to document the idea that some people have believed, that there was a fire department in Chestertown as early as 1825.The mutual fire insurance company was founded in 1845 and probably was the source of firefighting equipment. A hand pumper that was built in Philadelphia, PA in 1804 was purchased in 1878 for $1,000 and was operated by volunteers. All of the equipment, including the hand pumper, was turned over to the Chestertown Volunteer Fire Company when it became a corporation in 1908. Some of the other equipment included a ladder wagon with one 40 foot single section ladder, a chemical tank on wheels, and a hose reel on wheels. The company still owns the original hand pumper.

A new firehouse was started in 1908 and fire company members built it from blocks they made themselves. It was completed and dedicated on October 11, 1909. A 600-pound bell that was donated to the town by Miss Helen B. Denmead of Baltimore was rung at the celebration.

Chestertown's first motorized piece of equipment, an International with a rotary gear pump, was bought in 1923. A Pierce Arrow touring car was converted into a fire truck in 1926 and an ambulance was purchased in 1929.