It is with great sadness the Chestertown VFC announces the passing of W. Thomas (Tommy) Lynch. Tommy joined us in 1960 as a Junior member at the age of 16. While he held no elected administrative positions with the fire company, he progressed through the Active Firefighter ranks, achieving the high rank of Assistant Chief. According to his family, Tommy was devoted to the firefighting side of our mission and enjoyed the companionship, comradeship and esprit de corps found among firefighters.

When he was still active, Tommy participated in all the activities of the Chestertown VFC. He is especially noted as having served on the new apparatus committee for "Engine 6-4", purchased in 1983 and built by the Hahn Fire Apparatus Company. The photo we share of Tommy (facing the camera) was snapped in the early 1970's, and conveys the essence of his service with the fire company. This photograph was taken at our previous fire station on Cross Street, built in 1937. The building is now the Chestertown Town Office.

We, the officers and members of the Chestertown VFC express our sincerest regret and send our condolences to Tommy's family in this difficult time of their loss.

Services by Galena Funeral Home of Stephen Schaech will be private. The family has requested donations in Tommy's name to the Chestertown Volunteer Fire Company and the Kent & Queen Annes Rescue Squad. Our mailing address is... 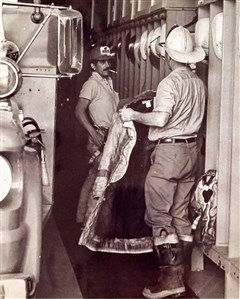