On Saturday, July 11, 2020 at approximately 8:33 pm, the Chestertown Volunteer Fire Company was dispatched as mutual aid to the Rock Hall Volunteer Fire Company for the Motor Vehicle Collision with Injuries, in the 7500 block of Rock Hall Road (Maryland 20), near Ricauds Branch Road. The crash was in that section of Maryland 20 locally referred to as “The Double Woods”.

Emergency personnel arrived to find a two-vehicle, “Head-On” type crash. Both vehicles had overturned and were lying on their side. There was a total of three (3) patients; one patient was evaluated by EMS and declared deceased. A second patient was found to be entrapped in their vehicle while the third patient, whom had self-extricated from their vehicle, was exhibiting only minor injuries. This patient refused medical treatment.

Upon arrival our personnel assisted with stabilizing the vehicle, a pick-up truck, by deploying our “Rescue 42” system. This is a commercially available system of portable struts. They are designed to stabilize overturned vehicles or vehicles found in precarious positions. To properly access the patient who was pinned, personnel then removed both doors, cut the roof supports and flapped the roof down. *Not counting our training time, this was the first incident where our new battery-powered hydraulic rescue tools were used.

The patient was then “packaged” for transportation to the hospital. Packaging refers to the technique of removing the patient from the vehicle while protecting their spine from further injury. To complete spinal immobilization, the patient is then placed on a backboard and strapped down. This patient was subsequently airlifted by Maryland State Police Aviation to the R. Adams Cowley Shock Trauma Center in Baltimore, Maryland. The condition of this patient is unknown. The helicopter landed here in Chestertown, in the open field across from the Kent & Queen Annes Rescue Squad on Maryland 291 / the Chestertown Bypass. Two engines from Chestertown VFC handled the Landing Zone.

We remained on the scene to assist Rock Hall VFC with lighting while a Crash Reconstruction Team with the Maryland State Police completed their investigation.

We operated at this incident for about four (4) hours. There were no injuries to emergency personnel. As a result of the crash and subsequent investigation, Rock Hall Road (Maryland 20) was completely closed. The MDOT/SHA (State Highway Administration) responded and set-up detours around the closed section of roadway. The roadway remained closed for about five (5) hours.

Great care was taken to protect the identity and dignity of the people involved in this incident. Our thoughts & prayers are with the family and friends of this tragic crash.

Organizations at this incident:

Photographs by the Chestertown VFC.

Media may use photographs with attribution. 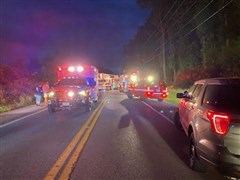 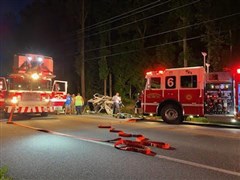 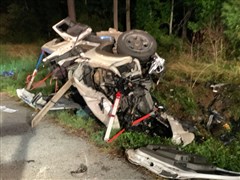