On July 16, 1954, a deadly accident occurred in Chestertown. Many people now living here are unaware of it. On the edge of town, where Chestertown Industrial Park is located, was a business called Kent Manufacturing. The compound was centered on the present-day intersection of Dixon Drive and Lynchburg Street. The business started out as a defense contractor at the beginning of World War II, making munitions for the war effort. It was owned by five men: Chestertown Mayor Phil Wilmer, Tony Fabrizi, Joseph McLain, and Charles Eshman. The work force was comprised of 80% women. To locals, Kent Manufacturing was known by several sobriquets, most included are “The Defense Plant” and “The Powder Plant”.

After the war ended in 1945, the demand for the munitions of war dramatically decreased. Kent Manufacturing mostly switched production to fireworks and pyrotechnics. The business was still a government contractor, so some defense munitions were certainly still in production.

Friday, July 16, 1954 started out like any other day. People were going about their daily business and routine, as people do. At 10:25 am, an explosion at the Defense Plant rocked the town. Even before the town fire siren sounded, many of our volunteer firefighters instinctively started for the fire station. They knew they would be needed. At the time, our fire station was on Cross Street, which is now the Chestertown Town Hall. In the few short years Kent Manufacturing existed, it was not uncommon for the Defense Plant to occasionally have an accident where something would explode.

Several minutes later, another large explosion rocked the town. Chestertown VFC oral history from members who were there report they were just arriving at the Defense Plant as the second explosion occurred. They were met at the gate by one of the plant officials and were told it was not safe to go in. They went anyway. Unless the situation is obviously very dangerous and a forlorn hope, that’s what we do. It’s always a calculated risk. As they were in there trying to get the firefighting operation set up, word came down to “GET-OUT!” The whole place was about to blow. In a conversation with Chestertown Past Fire Chief Franklin Legg, Sr., who was driving one of those engines, he told this writer he cut the hoses to escape as quickly as possible.

At 10:40 am, “The Great Blast” happened. Nearly the entire Defense Plant complex was decimated. Only a few buildings survived. Chief Legg reported he was at the corner of High Street and Lynchburg Street when it blew. As he recounted it, the blast knocked him off his feet. When it was deemed safe, fire company personnel cautiously made their way back towards the compound. As they had responded to previous incidents there, they knew there would be occasional smaller explosions as individual production projects cooked off. In this expectation, they were not disappointed. The air was rent with these smaller explosions and many of the buildings were furiously burning. Once it was evident the situation was stable, they made their way into the compound and started extinguishing the fires. They also began the grim process of counting the human toll. The ruins had to be carefully searched and the ashes sifted for those who had not been able to get away. A temporary morgue was established at the National Guard Armory, located on Quaker Neck Road just outside town. This building still exists but is no longer a military facility.

In all, eleven people lost their lives that terrible day. Five of those were identified. They include Nellie Starr, Nelson Lord, Mary Fallowfield, Tina Mae Taylor, Magdaline Seiler, and Eva Fisher. There were five that could not be identified. They were Ida Mench, Marguerite Batchelor, Betty Marie Wheedleton, Mary Covington, and Barbara Rockermann. Their remains were committed to a single grave in Chester Cemetery, marked by a solemn stone with all their names.

When the emergency started, and especially after “The Great Blast”, Chestertown residents self-evacuated en masse. People believed the town was going to be destroyed by a single, massive explosion. Fueling this concern was a report there was a cave on the grounds of the Defense Plant packed with explosives. This cave was undoubtedly a Powder Magazine where explosives needed for production was stored. To assuage the fears of the community, later that evening and into the overnight hours, the Army safely removed all the explosives.

That night and in the following days, Chestertown was all but deserted. Nearly every piece of glass in the entire town had been blown out by the massive shock waves. The National Guard had been called out to provide security and prevent potential looting. They patrolled the entire community and stood guard downtown, where every large plate glass window had disintegrated.

In the days, weeks, and months after the accident, this accident was investigated by the Federal Bureau of Investigation. They were able to trace the source of the incident to a pallet of M-80 (firecrackers) and a warming oven used to complete preparation of that device type. They were never able to determine exactly what happened to spark the explosion. It remains undetermined to this day.

Kent Manufacturing never reopened. The site was cleaned up and the property remained mostly abandoned for more than twenty-five years. Vita Foods, which maintained a pickle processing facility on nearby High Street, placed large wooden vats on part of the Defense Plant site. To steep and season prior to being processed, pickles were placed in brine contained in these barrels. Just a few years prior to the Defense Plant tragedy, Vita Foods itself was destroyed in a massive fire. The facility was rebuilt as a block and brick structure. After Vita Foods ceased operations, Dixon Valve purchased the property. Today, Dixon maintains a manufacturing facility there.

This writer grew up on High Street near Chester Cemetery. His parents repeatedly and emphatically warned him to stay away from the “Powder Plant” grounds. They had lived through that awful day and thought there could still be hazards there. As it turned out, they were right. In and about 1980, when the Chestertown Industrial Park was being built, site preparation was underway. As heavy equipment was digging and grading, they struck something, and a small explosion occurred. No one was injured, but nerves were certainly rattled. Work immediately ceased and the Army sent an EOD (Emergency Ordnance Disposal) Unit from Aberdeen Proving Grounds. They swept the entire property in an exhaustive search for additional unexploded ordnance. Thankfully, nothing else was located.

Today, most people working at or visiting the Chestertown Industrial Park are unaware of the tragedy that occurred on those grounds. Locally, the only tangible reminder is on the stone in Chester Cemetery, over those whose remains could not be identified. At the bottom is an inscription – “WORKING TO PRESERVE FREEDOM WHEN SUDDENLY TAKEN  JULY 16, 1954” To us, it’s left to remember their service and sacrifice. 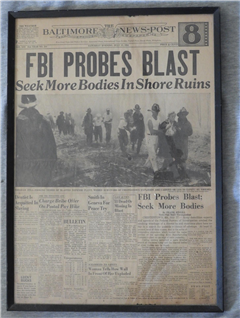 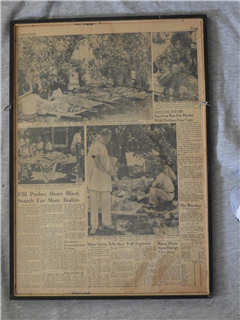 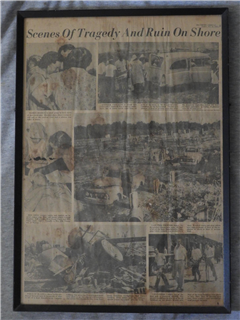 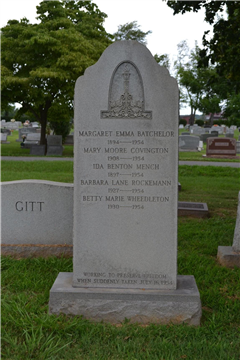 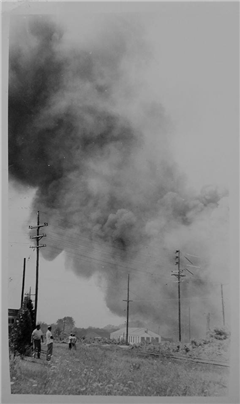 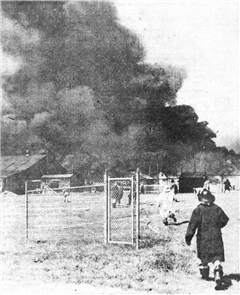