On Sunday, April 18, 2021, at 3:39 am, the Chestertown Volunteer Fire Company was dispatched for a “Smoke Investigation” in the 24000 block of Langford Road. This is in Broad Neck near the Langford crossroads, between Brices Mill Road & Maple Grove Road. Within minutes, while on routine patrol in the area, a deputy with the Kent County Sheriff’s Office arrived in the vicinity. The deputy advised the source of the smoke was a fully involved house, well off the road.

The lone occupant, an elderly female, had self-extricated from the dwelling and was at the end of the lane, by the road. She advised that it had been close to a half-hour since the fire started. She had her cellphone, but the battery was dead. There were no nearby houses where she could seek assistance. With this information, Kent County Dispatch upgraded the incident to a full “Structure Fire” box alarm, adding multiple mutual aid companies.

First arriving units found a 2-story house, containing a full basement, well involved with fire. The structure was mostly collapsed into the basement. Unfortunately, as sometimes happens, our first engine to arrive fell into a deep ditch at the entrance to the lane. The lane was blocked. While the engine was stuck, it was not disabled. Not to be dissuaded, our engine crew immediately hand-stretched a 3” supply line, with a gated-wye, more than 350’ up the lane. They hand-carried two 1-3/4” hoses up to the fire and connected up.

Fire conditions precluded any hope of interior firefighting operations. A completely defensive operation was initiated from the exterior. The fire was extinguished in short order.

The Incident Commander reported the situation could be handled by resources on the scene and those on the street… still responding. Two additional Tankers for water supply were also requested. Anything other than the tankers was placed in-service.

Delmarva Power was requested to cut electric service to the house.

The fire marshal was requested. A representative of the Maryland State Fire Marshal’s Office responded. They are conducting an Origin & Cause investigation. The findings of that investigation are not currently available.

The American Red Cross was requested to assist the female occupant.

There were no injuries to emergency personnel. EMS evaluated the elderly female occupant. She was not transported to the hospital.

We would like to extend a special thank you to Phillips Garage, in Sudlersville, Maryland. They responded with one of their rotators, in essence a truck-mounted crane. They safely lifted our stuck engine back onto solid ground. Thankfully, there was no damage to the vehicle.

We would also like to extend a special thank you to the Millington VFC. (The Community Volunteer Fire Company of Millington, Maryland) To maintain fire protection for the Chestertown community, they transferred an engine and tanker to our fire station.

We cleared the incident after about 5-hours. 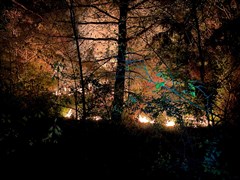 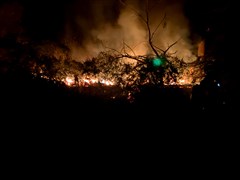 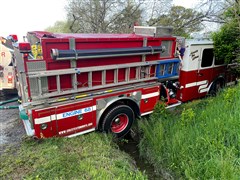 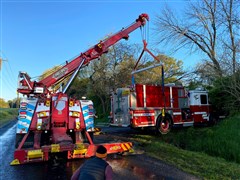