Recently James “Jim” Douglas was selected as our “Inside the Fire Station – Member Spotlight” profile. Jim officially joined us in 1996, although he had been helping for several years previous. Jim is retired from the maintenance department at Washington College, where he worked for many years. There, he had been employed as a carpenter. Jim is a Vietnam Veteran, having served honorably in-country from 1969 – 1971. After processing out, he took a year off and by his own words…. Did nothing but “relax”. Jim ended up joining the Delaware Army National Guard, serving honorably for many years. He retired from the Delaware ANG as a Staff Sergeant in 1995. In his leisure time, Jim relaxes by engaging in woodworking projects of all kinds. His woodworking shop is to be admired. He has been known to help friends and family with home improvement projects.

Undoubtedly, many of you have probably seen Jim on emergency incidents, as he serves as one of our Fire Police. The Fire Police help manage traffic and represent the face most people see at many of our emergency incidents. Additionally, when requested by local law enforcement, Fire Police help with traffic details related to community events, such as parades, charity runs, etc., even police incidents not related to a fire or crash emergency. Fire Police are officially deputized by the county sheriff, legally granting them the authority to stop, and / or detour traffic around emergency incidents. Because they are deputized, when it comes to managing traffic, their authority to do so is the same as that of a police officer. They do not have the police powers of detainment / arrest. Our Fire Police are immensely helpful and relieve the incident commander of traffic concerns.

Along with his wife Betsy, Jim lives in Queen Annes County, off Maryland 544 near McGinnis Corner. His stepdaughter, Dawn McCoy lives with them. Dawn is also a member of the Chestertown VFC, helping with events as she finds the time.

Please join us as we express our gratitude and appreciation to Jim for 25 years of solid service to the Chestertown VFC and the citizens of Chestertown, Kent County, and Northern Queen Annes County 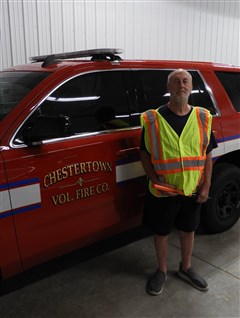