At a recent fire company meeting, long-time Life Member Michael “Mike” Olsen was selected as our “Inside the Fire Station – Member Spotlight” profile. While still in his mid-20’s, Mike joined the Chestertown VFC in 1996. In 2016, when he became eligible, his peers at the Chestertown VFC honored him by awarding Life Membership status. Operationally, Mike started out, as most young members do, as a firefighter. Later, he was selected to become an engineer, our designation for a driver / pump operator. He has also served as a Lieutenant, which is a junior officer leadership position in the fire company. He also serves on the Engineer Committee, a small cadre of experienced, qualified members that mechanically maintain our equipment, making minor repairs as needed, and arranging for more extensive work as required. At various times on the administrative side of the company, Mike has served as our Second Vice-President, and on the House Committee, where he occasionally served stints as the House Committee Chairman. The House Committee is responsible for building and outside property maintenance. Mike has also served on new apparatus committees, most recently on Rescue-Engine 6, which we’ve just taken delivery of. Outside of the fire company, Mike lives in Chester Harbor, in Queen Annes County, just across the Chester River Bridge. He is an avid outdoorsman, where he enjoys hunting and fishing whenever the opportunity arises. He also enjoys spending time with family and friends. To earn a living, Mike is a commercial truck driver, operating a heavy dump truck throughout the Northern Delmarva and the Upper Eastern Shore. Please join us in congratulating Mike on his selection as our Member Spotlight and thank him for his commitment to community service and public safety. 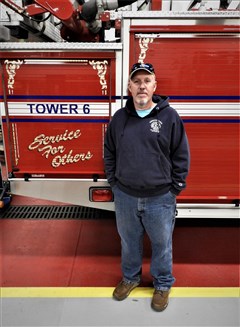