“Inside the Fire Station – Member Spotlight”

Jeffrey H. Thompson was selected as our “Member Spotlight” a few weeks ago. Jeff, as he is widely known, has a long and distinguished career with the Chestertown VFC and the fire service in general. That career is still going strong and vibrant.

Jeff is a Life Member of the Chestertown VFC, the highest honor our company can bestow on it’s members. He started his career with us in 1978, at the tender age of 14. In just a few short years, he will celebrate 4-1/2 decades of service with us. He started out in our Exploring program, a Boy Scouts of America co-ed opportunity the fire company sponsored for a long time. Some people would call it a cadet program. Since that time, he has gone on to be elected to every important leadership office within the fire company, including the Board of Directors, Company President, and Company Fire Chief. On the operational side of our mission, Jeff has held every appointed position from Firefighter up to Deputy Chief. One of the appointed operational positions he has held is that of Safety Officer, a critical function within the fire service. The Safety Officer helps ensure the health, safety, and well-being of our members, both at emergency incidents and around the fire station. On the administrative side of our overall operation, Jeff has served on many and varied committees, including ones such as House Committee and the Budget Committee.

Outside the Chestertown VFC, but still within the umbrella of the fire service, Jeff has been active. He has served as President of the Kent County Fire Chief’s Association. This organization promotes cooperation and fellowship among all the fire companies / Rescue Squad here in Kent County. He is a Life Member of the Maryland Fire Chiefs Association where he served a term as that organization’s President. He has moved through the ranks of the Maryland State Firemen’s Association where he was elected to the Board of Trustees. He was also appointed to the Residential Sprinkler Committee, where he served first as a vice-chair, then the chairman. Through public education and legislative lobbying, the Residential Sprinkler Committee works to promote the installation and use of residential sprinklers as a critical role towards reducing fire injuries and fire deaths in Maryland.

Since 2002, Jeff has been associated with the National Fallen Firefighter’s Foundation. This organization works to recognize and honor members of the fire service who have lost their life in the line-of-duty across the country. With a view to preventing firefighter deaths, the NFFF actively works to promote safety, health and fitness programs for the fire service. As a part of his NFFF contribution, at the annual Memorial Weekend held in October every year, he and others actively assist the fallen firefighter’s family with whatever transportation needs they may require. The NFFF Memorial Weekend is held in Emmitsburg, in Western Maryland. That is the home of the National Fire Academy and the location of the National Fallen Firefighters Memorial.

Jeff is widely regarded around the region for his service helping to plan and execute fire service funerals. He works with the funeral directors to coordinate the fire service part of all funerals. These funerals are for those in the fire service who pass from natural causes and for firefighters killed in the Line-of-Duty. He will quickly say that Firefighter-Line-of-Duty Deaths are one of the saddest duties he is called upon to perform. It is his fervent hope and desire that he, and those like him, are never again called on to perform this service. However, when called on, they do their absolute best to organize a touching, professional ceremony.

Jeff is a Chestertown native, born and raised. With close ties to the outdoors our Eastern Shore is widely regarded for, Jeff is an avid outdoorsman who loves to fish and hunt. He still lives in the immediate area with his wife Judith (Jacob) Thompson. They will soon celebrate 35 years of wedded bliss. Jeff and Judy have two children, Michelle Lea and Kyle Jeffrey. Michelle lives in Greensboro with husband Josh Marshall and their son Wade. Kyle lives in Chestertown with wife Becca and their son Maverick. Kyle is also a member of the Chestertown VFC where he has served in the operational role as a Lieutenant. Already, Kyle has displayed attributes that makes his father proud.

Jeff and Judy maintain a year- ‘round camping site in Chincoteague, Virginia. Their leisure time there they affectionately refer to as “Island Time”.

Through his life’s work within the fire service, Jeff has been the recipient of many awards and honors…

2009 Chestertown VFC “Firefighter of the Year”

2012 Runner Up – American Legion Firefighter of the Year 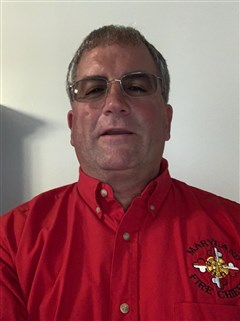