At 5:32 pm on Wednesday, May 5, 2021 the Chestertown Volunteer Fire Company, along with multiple mutual aid companies, was dispatched for the Motor Vehicle Collision with Entrapment, reported Head-On, in the 26700 block of Morgnec Road (Maryland 291) just west of American Legion Road. First arriving was a paramedic from Kent County EMS, confirming head-on crash, with two trapped… the only occupants of their respective vehicles. Tragically, one patient was declared deceased at the scene, with the second patient pinned in their vehicle. This patient was in extremely serious condition.

Chestertown VFC’s Engine 6 arrived and immediately started extrication operations for the surviving driver. Using our hydraulic Hurst Rescue System, the door was removed. The crew then performed an operation called a Center Dash Roll. This has the effect of removing the dash and console up and away from the patient This facilitates easy access, packaging, and removal of the patient. The patient was transferred to a waiting ambulance, where the patient could be thoroughly assessed, and in-depth care provided pending the arrival of the helicopter.

Due to the extreme nature of the incident, aviation was requested early. A helicopter from the Maryland State Police Aviation Command responded and landed in the field adjacent to the crash scene. The patient was subsequently airlifted to the R. Adams Cowley Shock Trauma Center in Baltimore, Maryland with critical, life-threatening injuries. As of 11 pm, the condition of this patient is not known.

The road was completely closed for approximately five (5) hours while the Maryland State Police Crash Reconstruction Unit performed their investigation. The road reopened about 10:40 pm. The State Highway Administration - MDOT responded and assumed responsibility for the closure and subsequent detour. Units from both Chestertown VFC and Crumpton VFC remained at the scene to support the crash investigation with lighting.

We would like to extend a special Thank You and note of gratitude to the Blue Bird Tavern in Chestertown. They provided food for the crews working at the scene. Because of the incident timing, these crews had missed their dinner.

Organizations dispatched to this incident… 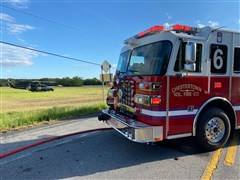