On Thursday, August 26, 2021, at 8:24 pm, the Chestertown Volunteer Fire Company, Kent & Queen Annes Rescue Squad, and Kent County EMS, along with multiple mutual aid organizations, was dispatched for the Motor Vehicle Collision with Injuries – High Mechanism, reported as Head-On, on Fairlee Road (Maryland 298) between Earl Nicholson Road & Annie Crow Road. With personnel at our station, we were able to respond quickly. Units were on-location at 8:33 pm, 9 minutes after dispatch.

With extremely severe damage to the front-end of both vehicles, while EMS crews provided life-saving care, crews immediately went to work to facilitate patient removal. Personnel from our Engine 6, using our Hurst system hydraulic rescue / extrication tools, the doors, and the roof of the first vehicle were completely removed, and a dash roll completed. At the same time, personnel from Engine 4 (Kennedyville VFC) went to work on the second vehicle. In this vehicle, the patient care / extrication situation only required the doors removed on one side. This is referred to as a “side-wall removal”. As the extrication operation was proceeding, an 1-3/4” hose line was deployed to provide fire protection. The Incident Commander reported extrication of all four patients was completed at 8:56 pm, twenty-three (23) minutes after the first unit’s arrival. All patients were stabilized and packaged. Package refers to placing the patient on a backboard with complete spinal immobilization. All patients were subsequently transferred to waiting ambulances where paramedics could complete a detailed assessment of their injuries and begin focused patient care.

Because of the serious nature of the crash and condition of the patients, aviation was requested. Initially, four (4) helicopters were requested and started. They were… Maryland State Police (MSP) Trooper 1 (Martin’s State Airport, near Baltimore), Trooper 2 (Andrews Air Force Base – Prince Georges County), MSP Trooper 6 (Easton Airport), and Eagle 2, the National Park Service aviation unit based near Washington, D.C. Ultimately, Eagle 2 was canceled. It was decided two patients, mother, and daughter from one vehicle, would be airlifted on one MSP helicopter.

With four (4) helicopters on the way, it was determined more then one LZ (Landing Zone) would be required. The first LZ, only large enough for one aircraft, was established in a field west of the crash scene, on Fairlee Road (Maryland 298) near the intersection with Fish Hatchery Road. Engine 7 (Rock Hall VFC) handled safety & security at this LZ. The second LZ was established at the Elks Lodge on Bell Rose Lane, just off Chestertown Road (Maryland 20) about 2-1/2 miles southeast of the crash scene. There is ample room at this location to handle multiple aircraft. Engine 4 (Kennedyville VFC) handled safety & security at this LZ. As previously mentioned, Eagle 2 was canceled. Just two MSP aircraft landed at the Elks Lodge.

All patients were subsequently airlifted to Baltimore area hospitals. One adult female was transported to the R. Adams Cowley Shock Trauma Center in critical condition with life threatening injuries. One pediatric female was transported to the Pediatric Intensive Care Unit (PICU) at Johns Hopkins Hospital in critical condition with life threatening injuries. The adult mother and pediatric female daughter were transported to Johns Hopkins Hospital, which in addition to the PICU, they are also a Level 1 Trauma Center for adults. The mother and daughter both were in serious condition, with potentially life-threatening injuries. The conditions of these patients are not known at the time of this release.

Fairlee Road (Maryland 298) was closed for an extended period during the rescue operation and subsequent investigation by the Maryland State Police Crash Reconstruction Unit. Closures were initiated by our Fire Police. As the closure was expected to be lengthy, the State Highway Administration (SHA), Maryland Department of Transportation was notified. They responded and assumed responsibility for the road closure and subsequent detour. The SHA also brought their generator and light plant to provide illumination for the crash investigation. This allowed the fire department to clear the crash scene.

We operated at this incident for three (3) hours, thirty-three (33) minutes.

Organizations dispatched to this incident; and responded…. 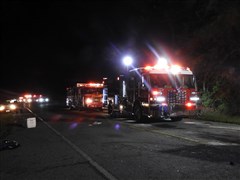